Diane gave me an Aoyue 2900 soldering station for Christmas in 2009. I’ve had a few opportunities to use it for various tasks ranging from fixing a servo with a loose connection in our cat’s favorite toy to desoldering voltage measurement leads from capacitors on a system-on-module. This is my first soldering station for private use and I’ll cut through the thick-as-lead suspense and say that it performs great. 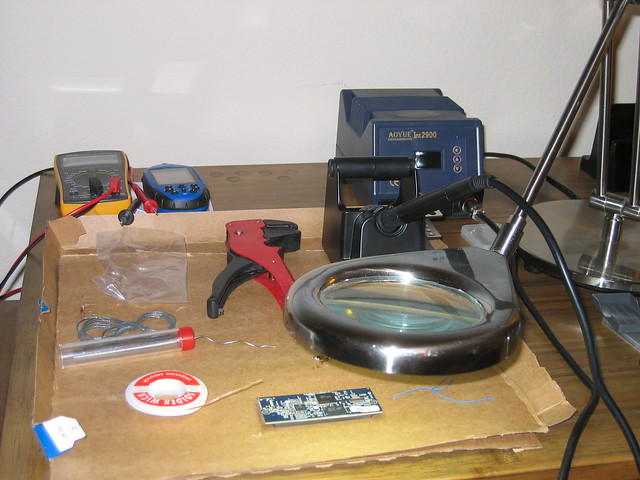 The Aoyue 2900 comes with the soldering station (digital readout and temperature control, with reset), a no frills iron and a simple stand for your iron, spare tips & sponge. The kit predictably comes with one pointed soldering tip (no flat tips or blade tips), and a simple guide for setup and operation. The guide is so short and sweet that I can’t think of a reason not to glance through it.

Enough about what’s in the box, how does it perform? The tip heats up from room temperature to the default 350°F in around 10 seconds. The provided handle provides enough heat protection for me, and I’m a wuss regarding hot things. The rubber choke at the neck could be a bit bigger for a better grip, but this is a minor quibble. The provided tip worked as-expected after a proper tinning. Basically, it solders stuff.

So what could possibly be wrong with this product? For starters the stand is a joke. The choke on the neck of the handle is a bit small as mentioned above but the problem is greatly exacerbated by the horribly designed O-ring on the stand that is supposed to act as the rest for your iron. Good luck getting the tip to float freely in there and not contact any other metal. I learned this the first time using the station: I casually put the iron in the stand as any normal person might and quickly noticed a bit of smokiness coming from where the tip was boiling off the black finish of the stand. From this point on putting the iron into the stand is a two handed job as well as a big disappointment. If you have an old ‘n’ trusty stand you’ve been using for years don’t throw it out; you’ll want to use it with this station.

On a lesser note the spool axle attached the stand (a nice touch in theory) rests very primitively in a trough; any force applied to it, such as quickly unspooling solder during tinning, causes the spool to hop off of the stand. The spool axle could also have more clearance from the base of the stand as larger spools of solder won’t fit. Least importantly, but still annoying, is that the sponge that comes with it is super wimpy. Even after a decent bath of pure Texas tap water, the sponge was ~half a millimeter thick and tended to scoot all around the base instead of holding it’s ground while cleaning the tip of the iron. Realistically sponges are completely disposable so after this one has given up the ghost it will be quickly replaced with a much nicer one.

So what is the verdict? The important parts of the station work great. Temperature control is simple and responds quickly with an affirmative “beep”. The iron is simple but of adequate quality and the supplied tip is what 90% of hobbyists need to get the job done. The stand sucks but if you have your own that you like already then nothing about the station’s setup forces you to adopt to one provided. Even the terribly designed solder spool dispenser is easily overlooked since many hobbyists simply handle the solder spool by hand. I rate this as a “buy” and am very pleased with the purchase Christmas gift. I can’t really compare to other low-cost soldering stations since the kinds I’ve used at university and at work are much more expensive, but I don’t see much room for improvement in the core design of this station given the rock-bottom price.